Schertler Ambassador Dario Fornara recently appeared at the “International Guitar and Harp Festival” at Villa Spinola in Bussolengo, performing with and presenting the ARTHUR modular mixer, the TIM compact PA system and the Magnetico M-AG6 pickup for acoustic guitar.

The festival, which has successfully completed its eighth season, is organized by artistic director Monica Bulgarelli, a respected teacher, performer and promotor of an event which, today, is considered one of the most prestigious and important on the Italian musical scene. The main stage played host to performances by the Celtic Quintet, guitarists Alberto Caltanella, Andrea Valeri, Dario Fornara and Maneli Jamal. Other highlights included a trade show featuring Italian luthiers, a concert by the 'I Chitarrissimi' music school, seminars given by invited artists and a demo by Fornara in which he presented the ARTHUR mixer, TIM PA system and the Magnetico M-AG6.

Fornara, a former electric guitar player who is now a leading figure on the Italian acoustic scene, says: “The combination of TIM and the ARTHUR mixer - in this case configured for my needs with 2 Yellow Instrument inputs, 1 Microphone input and 1 L / R Output - once again attracted the interest of show participants (in particular technicians and sound engineers) who were able to personally evaluate the great potential, dynamics and transparency obtainable in such a small format. This system, along with the M-AG6 pickup installed on my Chatelier guitar, was also used by me during the evening concert. It delivered a warm sound, which was also powerful and enveloping. At the end of the concert, to my great satisfaction, many of the audience members expressed appreciation for my sound - not least the guitarist colleagues who were present. It is a great gift for those who, like me, are passionately living these aspects of their business.

And, just for the guitarist friends who often ask for more info on using these products and for some more detail on my sound: Mounted on the guitar is a Magnetico M-AG6 with connected S-MIC-M condenser mic. In the “mix” I use about 15% of the S-MIC-M microphone component, basically adjusting the volume of the S-MIC until the ‘percussion’ is detected on the guitar body - always the minimum needed, because I like to push maximum volume without having problems with feedback. I never use the hole cover because it dramatically changes the guitar sound, for the worse. The guitar signal goes through an octaver pedal that only duplicates low frequencies. (It’s here that Schertler gear, and in particular TIM, differs from its competitors which often cannot handle such sounds!) The sound then passes through a delay and a digital reverb to end up directly in the Arthur mixer's Yellow module, with GAIN at 15 o'clock. The 'Warm' filter is always active, while equalizing usually includes HI at 9 o'clock, LOW at 10 o'clock and a cut in the MID to -13dB with Parametric at 13 o'clock. I hope this information is clear and will be helpful in some way.” 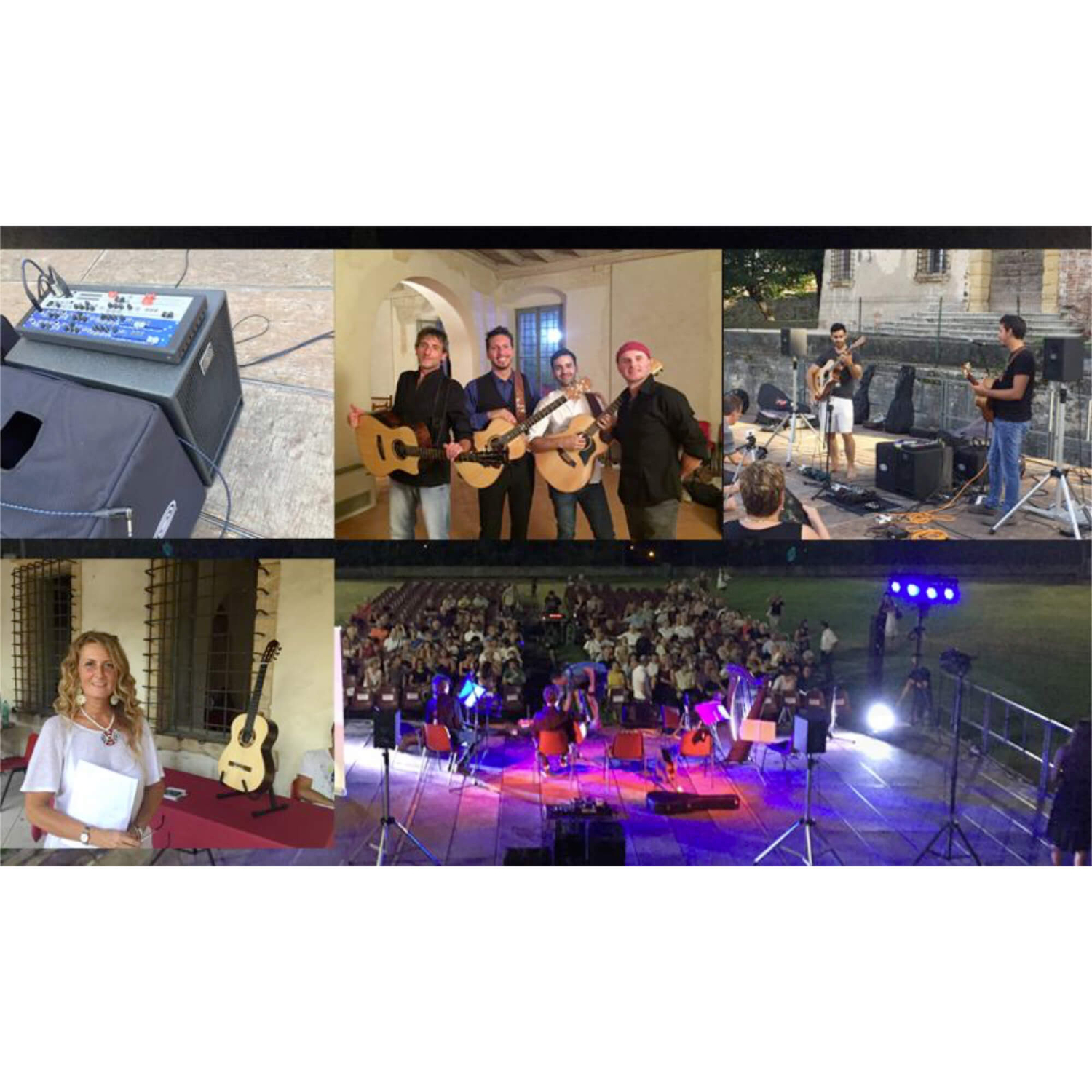